This product is currently sold out.

Marble may inspire the artist in you, just as it inspired great sculptors to unlock this stone's mystery. Shape history in your hands with SoapRocks Marble, a classy looking soap for intimate art. Carved for your perfection.
Inspired by nature, SoapRocks are a very mild glycerine-based soap that slowly weathers away in your hands like a stream stone in geologic time.
Size: 5.5" x 4" x 2.5"
Net weight: 6oz.
Fragrance: Pinion Moss

Edit#2: my aqua geode review was hidden because I said it smelled like lemon public restroom soap. My fire opal review with "profanity" was censored with *** and only contained two letters from the English alphabet. Even if you're wrong I still love the product. Just wish my aqua geode was green and brown like the picture and not blue and grey like I recieved. I even showed my aqua geode to a friend and they said the blue and grey looks drastically different from the display picture and not in a good way. profanity was censored. Edit: changing ALL of my 5 star reviews to 3 stars because you guys are hiding the reviews that had criticism but you are publishing the reviews that I didn't critique. TWO different soap rocks I reviewed look nothing like the display picture. When I received them in the mail I literally laughed at how bad they looked compared to the display pic. Ordered 5 different soap rocks. I haven't unwrapped them all, but so far marble is my favorite and I'll definitely be buying more. The soap rock fragrance is much stronger than your average soap and you'll still smell it on your hands hours after using them. Out of the 5 rocks i received marble is my favorite looking from the bunch(I cut my marble rock up and put in bathroom/kitchen) If I'm not mistaken, the look of these soap rocks change with each use so maybe I shouldn't speak too soon about which is my favorite. Marble smells similar to Johnson & Johnson baby soap, but this is definitely NOT baby soap- smells more like classy and upscale Johnson & Johnson baby soap but for adults. I'll be ordering the marble soap rock again for sure. The marble soap rock I received didn't look exactly like the display picture, but it's cool that each rock will be different-plus I actually prefer how my marble rock looks vs. The display pic. I also ordered aqua geode(looks cool but not my favorite scent- smells like lemony soap from a public restroom) the fire opal smells peachy/tropical and I'm so excited to unwrap that one soon. Tanzanite smells like gold Dial brand soap. I also ordered malachite but gave that one as a gift- if I remember correctly the malachite smells similar to aloe. Marble and fire opal are the 2 best smelling from the 5 I ordered. Marble is my overall favorite so far. 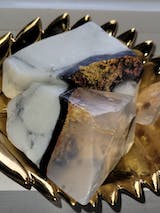 The only review that was hidden contained profanity and was automatically obscured. All SoapRocks are unique and will vary from soap to soap in coloration and patterning, which is what makes them special.

Just perfect !! Nice to look at and to smell also! Bernadette from Belgium

I order soap rocks from Oak Manir as they have a large selection. Always get great service.